What is Business Memo in Communication? Functions of Memorandum, Importance of Memorandum, Business Memo. Memo is the short form of memorandum. The literal meaning of the word Memorandum is a note to assist the memory. A memo is a shot piece of writing (short letter), generally used for internal communication between executives and subordinates or between the officers of the same level of an organization. It is also called as inter-office memorandum.

What is Business Memo

According to RC Sharma and Krishna Mohan, “A memorandum is a short piece of writing generally used by the officers of an organization for communicating among themselves.”

Rajendra Pal and Korlahlli say, “A memo is used for internal communication between executives and subordinates or between officers of the same level. It is never sent outside the organization.”

According to Lesikar and Petit, “Memorandums of course are the letters written inside the organization, although of few companies use them in outside communication.”

From the above discussion we can conclude that a memo is a short writing used between executives and subordinates or between the officers o the same level of an organization. Business Communication 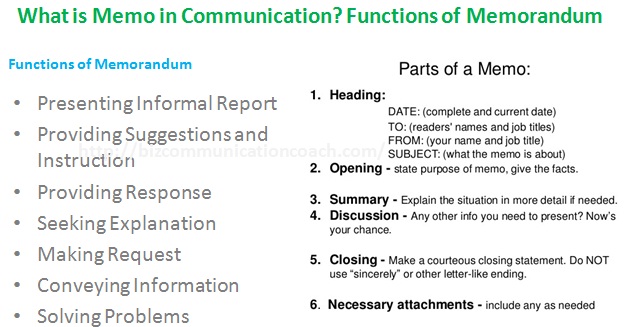 Importance or Functions of Memorandum

From the above discussion we find that memorandum performs different functions to carry out the purpose for which it is used. Actually it is used for different purposes in the organization. There are more information about What is Business Letter? Objectives of Business Letter